When clicking on one or more instrument(s) in the tree, the editing page of instruments appears. 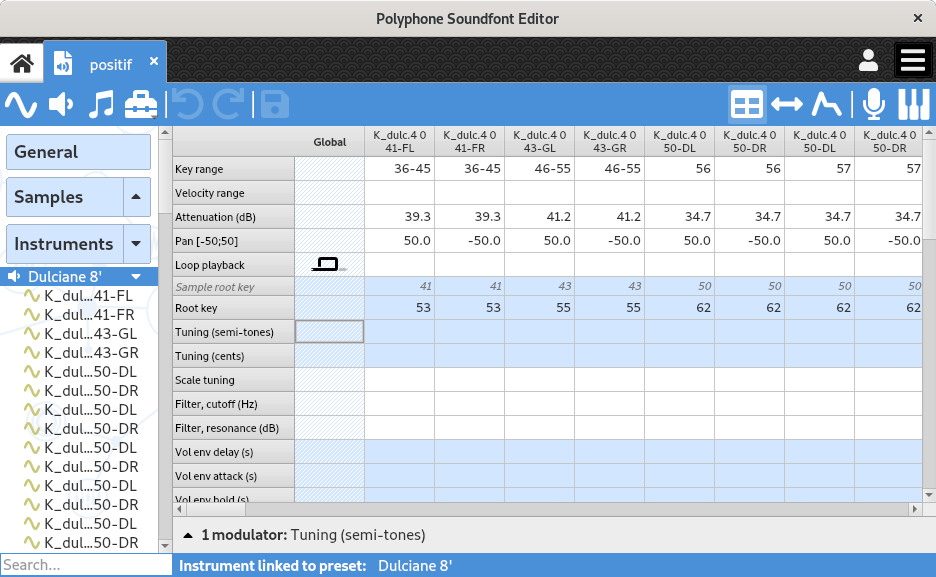 In the case where several instruments are selected, the global parameters of each of these instruments can be edited. 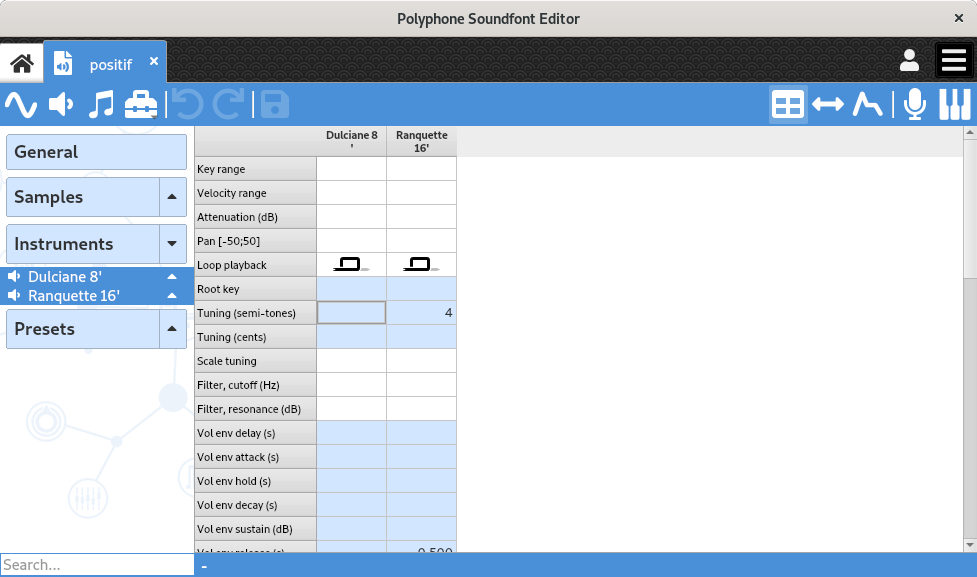 The table allows a global view and the editing of an instrument configuration. A change of a parameter in the "global" division applies to all divisions, except for divisions whose same parameter is already specified.

The editable parameters are:

Editing facilities in the table

To facilitate and speed up editing in the table, the following features have been implemented:

Do not forget the tools available! In particular the tool allowing a key-based configuration.

For testing purposes, it is possible to mute a division or mute all divisions but one in the tables. The options are accessible with a right click on the header of a division. 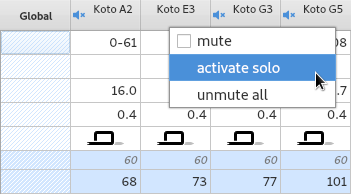 The key range editor allows you to quickly and graphically dispose samples according to their key and velocity ranges. This graph further highlights configuration problems, such as zones free of samples or unwanted superpositions. 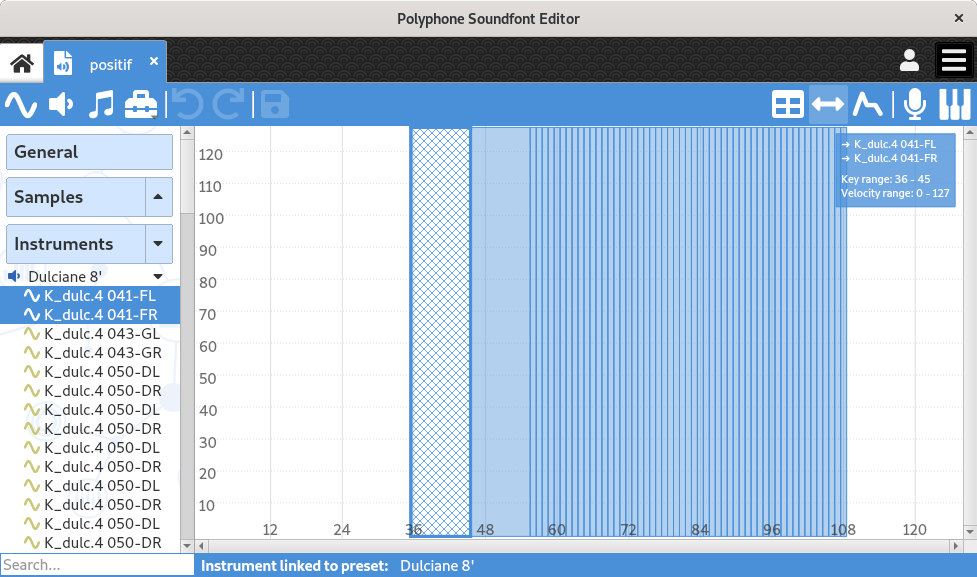 Each sample is represented by a rectangle. The color is semitransparent, so that the superposition of several elements is identifiable.

A simple left click on a rectangle will select it and removes all other selections. If several rectangles are superimposed, consecutive clicks change the selection under the mouse cursor.

A multiple selection is possible:

After having selected one or more rectangle(s), it is possible with the left button to:

If several rectangles are selected, all changes are made synchronously.

Maintaining the right click allows you to change the zoom around the selected point.

Maintaining the left click allows you to move the graphic if the initial point is not on a rectangle. 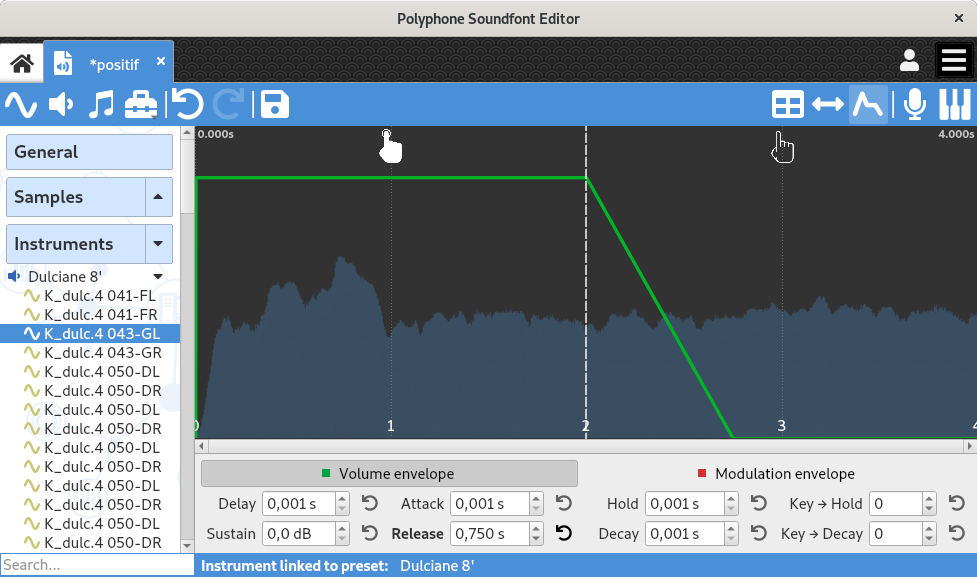 The left part of the graph represents the evolution of the envelope when a key is triggered. 7 of the 8 parameters are involved in this representation:

The right part represents the evolution of the envelope when a key is released. Only the release duration is involved in this representation. The envelope gradually returns to 0 during this duration.

When only one division of an instrument is selected in the tree, the corresponding sound sample is displayed on the background. It is thus possible to better visualize the evolution of the envelope relative to the sample being played.

The lower section of the editing page of instruments is intended for the creation of modulators, globally for an instrument or for a particular division. When you play an instrument, a modulator listens to one or two MIDI signal(s) and modify one of the parameters in the table according to the mathematical rule configured. The output of a modulator can also be used as input to another modulator (this function appeared in version 2.04 of sf2 format and may not be supported by some synthesizers). 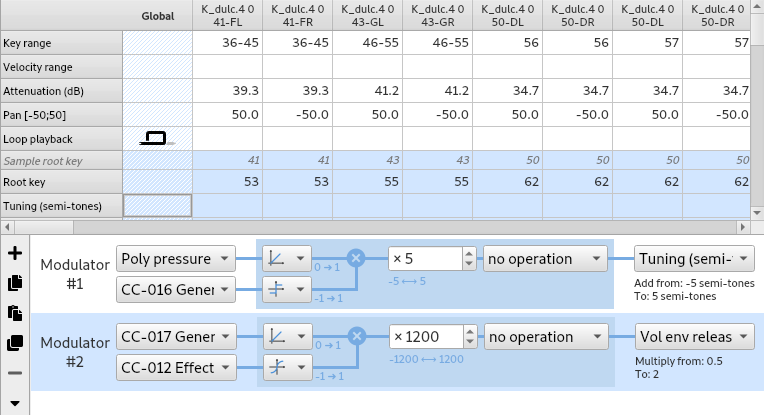 Buttons on the left are made for:

When a modulator is added, the border of the corresponding cell in the table is thicker (see the tuning in the global column above).