When an instrument or one of its divisions is selected in the tree, the tool menu contains several tools sorted in 4 categories:

Using the tools simultaneously on several instruments is possible (with a multi selection), except for creating chords, mixtures and for displaying parameters.

This tool displays the evolution of a parameter according to the key. A logarithmic scale is available (take care of values equal to or less than 0!).

The tool computes the minimum and the maximum attenuations in all selected instruments, and gives you the possibility to safely add an offset to all attenuation values. 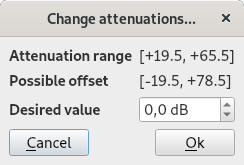 This feature slightly detunes the instrument notes, so as to create an undulating effect. The intensity of the effect is adjustable.

This tool allows the editing of a parameter for all divisions of an instrument simultaneously. 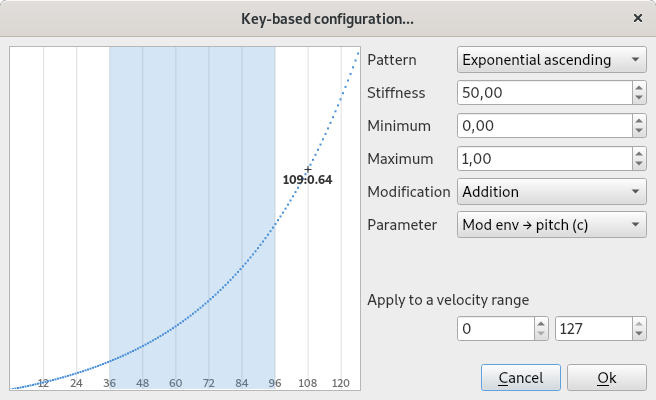 It is possible to apply the changes only on divisions whose velocity range is comprised in a specific range, useful for example in the case where a piano has several velocity layers.

This tool creates automatically a release for each division of the instrument. Release times are computed taking into account the first two parameters and a pitch modification may be added by using the third one. 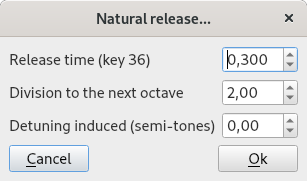 The software automatically determines the key ranges of all divisions of an instrument, in order to optimize their use all over the keyboard.

This feature spatializes sounds according to their pitch, which can be useful for a piano for example (bass and treble left to right).

Other options are available:

The graph is updated every time a setting changes for a better visualization. On mouse over, the correspondence note number / balance is displayed.

Default modulators are automatically assigned to every instrument. This tool can create modulators that will override or disable them.

All modulators of all selected instruments will be removed.

Based on an instrument, this tool allows you to create all possible chords. This could be interesting for example for the creation of a choir or pads. 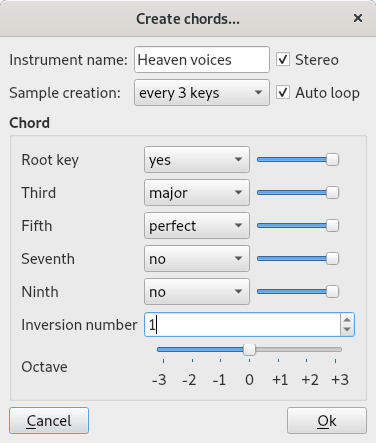 Here is an example, before and after:

This action has for effect the duplication of all divisions of an instrument. For example, if a sample linked to an instrument has a key range of 36-38, the software duplicates this division so as to have 3 times this linked sample for the key ranges 36-36, 37-37 and 38-38. It makes then possible to thoroughly edit each sample parameter for each different note, instead of editing whole divisions with the same parameters.

It is also possible to duplicate the divisions according to velocity ranges. 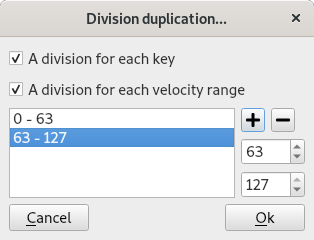 Specific to the organ, this tool allows the creation of a mixture from an existing instrument. An interface appears for specifying the different mixture divisions, and for each the list of the ranks. Types of possible ranks are very diverse, ranging from the octave to the 27th harmonic. 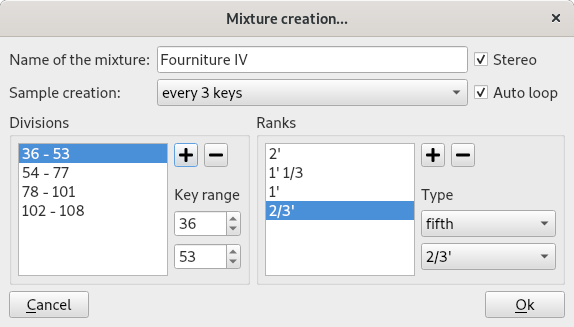 To work, this tool relies on all samples associated to the selected instrument, the range defined for each sample and the corresponding attenuation. Samples have to be tuned regardless the definition of the instrument (via the sample editor), and the root key specified must not take into account membership in a stop (no transposition if the sound is a principal 4' for example).

An option allows the automatic loop of created samples, another sets the creation interval of samples. Finally, it is possible to choose the type of the created sounds: mono or stereo.

Here is an example, before and after: